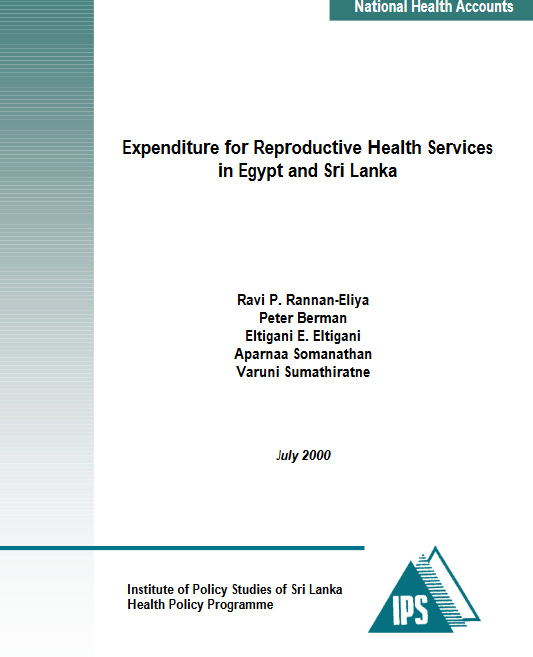 Expenditure for Reproductive Health Services in Egypt and Sri Lanka

Using a national health accounts framework, comprehensive estimates of expenditures for reproductive health services and family planning in Egypt and Sri Lanka are derived. These cost estimates include the full costs of overheads and non-service delivery costs. Reproductive health service expenditures are defined as expenditures for family planning, prenatal and postnatal care, childbirth, infant care, and obstetric and gynecological services. In nominal terms, total expenditures were found to be $5.29 per capita in Egypt in 1994/95, and $3.10 in Sri Lanka in 1997. These expenditures are comparable, once standardized for differences in income levels, birth rates and women who are married, with expenditures in Sri Lanka modestly less in per capita terms ($4.94 versus $5.29). The relative contribution of public and private sources of funding was quite similar in both countries. Public sources (which includes donor assistance) accounted for two-thirds of funding in both. Item-wise, family planning and MCH services accounted for the smallest share of costs (less than 22%). The largest cost components were childbirth and general obstetric and gynecological care, which accounted for a quarter and a third of total expenditures each. General gynecological care in both countries is predominantly privately financed, indicating a need to rethink policies to fully take into account private sector contributions. The similarity in spending levels in the two countries contrasts with the difference in levels of utilization and access to services. Sri Lanka achieves almost universal access to key services with less expenditures. This suggests that efficiency improvements may offer more potential for expanding services than new resource mobilization.