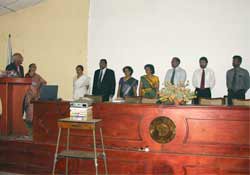 Executive Director was inducted as a Fellow of the National Academy of Sciences of Sri Lanka,Sri Lanka Association for the Advancement of Science (SLAAS) Auditorium,

Executive Director was inducted as a Fellow of the National Academy of Sciences of Sri Lanka (NASSL) at the 27th Annual General Meeting of the Academy held on 17 June, 2006 at the SLAAS Auditorium. He was the only Social Scientist to be elected this year among many Scientists- R. Hewamanne, N. E. Gunawardene, M. H. R. Sheriff, D. S. A. Wijesundara, J. P. Edirisinghe, and S. H. P. P. Karunaratne (http://www.nassl.org)

Executive Director being inducted with the other Fellows in the presence of the President of the NASSL, Arjuna Aluwihare and Secretary General of the NASSL, Kshanika Hirimburegama.