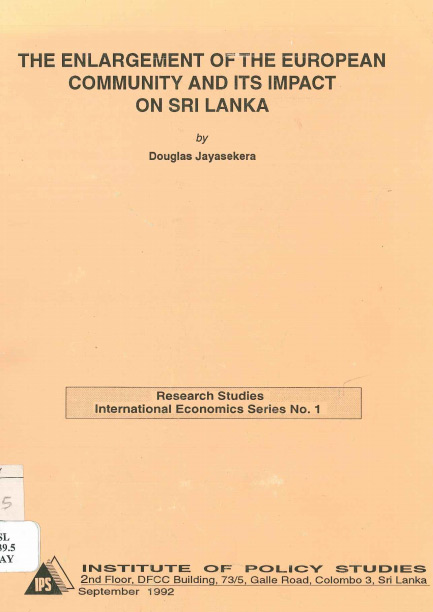 Enlargement of the European Community and Its Impact on Sri Lanka

The European Community and the seven countries comprising the European Free Trade Association (EFTA) have agreed on the establishment of an European Economic Area (EEA) with effect from January 1, 1993, creating thereby a free trade area of 380 million consumers. The European Economic Area, the world’s biggest free trade zone, would stretch from the Arctic to the Mediterranean, and from the Atlantic Ocean into Central Europe. Obstacles to the free flow of Goods, Services, Capital and Labour are expected to be abolished, with the exception of the sensitive agricultural sector.

It is possible that certain member countries of the EFTA, such as, Austria, Sweden, Finland, Switzerland and Norway, who are not at present members of the European Community, will seek to join it in the near future; the same could be true of the former socialist countries of East Europe. Some less developed countries too, such as Turkey, Malta and Cyprus have also indicated an interest in seeking membership in the European Community. Hence there is the likelihood of a very large trade association emerging in Europe, which could have a significant impact on trade the world over, including Sri Lanka.

In the wake of the Single Market in 1993 and the envisaged enlargement of the Community, an economic and political union is also expected to emerge. Of significance is a move for a single currency, by 1999 at the latest-a beneficial effect of which is foreseen as an increase in trade among the members of the Community, with the elimination of currency fluctuations. Whether this will be so in actual practice remains to be proved. What could prove undesirable, however, is a loss of independence in the management of monetary policy at the national level. Among other proposals towards further integration, are the establishment of a single central bank, a single foreign and defence policy, and uniform rules and regulations for the management of labour, industry and the environment.

Those opposed to European integration have warned against the emergence of a federal Europe and an European super-state, which is in danger of threatening and ending national sovereignty. Such opposition was evidenced in Denmark, for example, where the country voted against European union.

However, the Maastricht Declaration for greater European integration and cooperation, which was adopted by the 12 states of the European community in December 1991, appears on the road to success. The ratification of the Maastricht Treaty will be followed by formal negotiations for the enlargement of the Community.