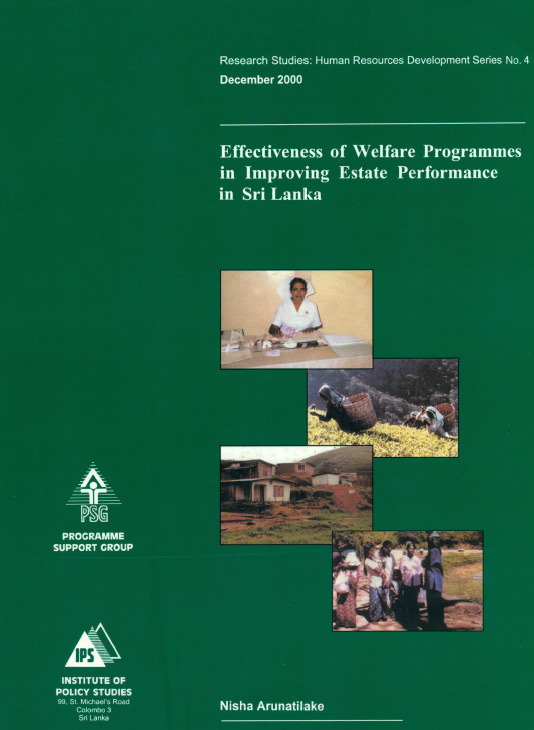 The plantation management has to overcome many hurdles in their effort to remain competitive in the world market. Among these, issues pertaining to labour costs and availability are fast coming to the forefront. Considerable changes have taken place both in the estate sector and the macro environment of the country that have influenced the labour supply and demand situation of the estates. If the present trends continue, a labour shortage situation is imminent. To reap the dividends from productive investments in the sector, the estates must have access to a ready and reliable work force. Hence, it is vital that the management take timely action to improve labour supply problems.

Since plantation crops are essentially export oriented, individual producers have — in the absence of marketing initiatives– little influence over the prices. As a result, estate profitability is mainly determined by the efficiency of the management in minimizing costs. Labour costs — given the labour intensive nature of plantation crop production — account for a significant portion of total costs. Since the late eighties, labour costs have been rising in the estate sector. If these wage increases are to be accommodated without eroding the competitiveness of the sector, labour productivity has to increase.

Traditionally labour has been considered as a cost, not as a resource to be developed. Labour welfare improvement programmes were launched mainly for humanitarian reasons. Partly due to availability of a cheap, submissive, captive and abundant labour force, there was little incentive to look at expenditure on social welfare as investments that contribute to the long-term productivity of the estates. There is increasing qualitative evidence of links between worker welfare and estate productivity. However, no study to date has rigorously assessed the direction and magnitude of these linkages.

This study hopes to fill this gap in the literature. Using a multivariate analysis, it examines the inter linkages between social welfare programmes and labour performance indicators while controlling for all other contributory factors. In particular, the study analyses the effects of: 1) crèche attendance, 2) better housing, 3) individual latrines, 4) maternal care services, and 5) availability of qualified medical personnel on labour outturn and labour productivity.

The results for the most part are consistent with the findings of earlier qualitative studies and conventional wisdom. They show that most welfare programmes affect labour outturn and productivity positively, and that management can expect to improve profits through investments in welfare programmes. One exception was the impacts of new or improved housing on labour outturn. The study cautions that this unexpected result could be possibly due to the nature of the housing programme and its recent inception. It argues that the impact from new or upgraded housing on labour performance may also be positive as the housing programme matures.