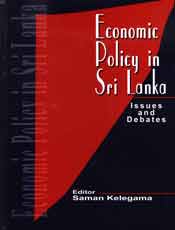 It is a collection of essays on Sri Lankan economic policy issues and debates with contributions from specialists in the field, and published by Sage, New Delhi , India . and fills the existing void in the literature.

South Asian Survey, Vol (14), 2007 – The essays contained in this volume discuss the historical evolution of Sri Lanka’s social and economic policy and the ideology and debates governing it.

Sunday Island, 1 May, 2005 – Economic policy has been a key topic of debate among economists, social scientists, policy makers, administrators, investors, donors and others interested in growth and development.

Frontline, Chennai, April 2005 – GAMINI COREA is one of Sri Lanka’s most outstanding economist-civil servants and has held many key positions in that country, as Secretary of the National Planning Council, Secretary of the Cabinet Planning Committee and Senior Deputy Governor of the Central Bank.

Hindustan Times, 31 January, 2005 – Decades of civil war, a massive left wing uprising in the 1980s, and now the tsunami — the Sri Lankan economy couldn’t have asked for more trouble.

Business World, 13 December, 2004 – THIS festschrift honours Gamani Corea, one of Sri Lanka’s top economists, and gives a thorough look at the state’s development and political ideology. Its 522 pages are simply crammed with information. Yet, it ignores the violent ethnic conflict- which is, in fact, its most remarkable aspect. Despite the troubles, Sri Lanka’s economic reform has continued, putting it streets ahead of its South Asian neighbours.
Hindustan Times, 2004 – The national planning exercise of the Sri Lankan economy was started in the early 1950s and the economic liberalisation.

The Economic Times , 28 November, 2004 – Gamani Corea was at the forefront of third-world anti-globalisers while at the helm of Unctad, or working within Sri Lanka’s policy-making apparatus. So it is to his credit that he has seen the writing on the wall since, and been assessing how to address the fallout of globalisation, now seen to be a fait accompli.