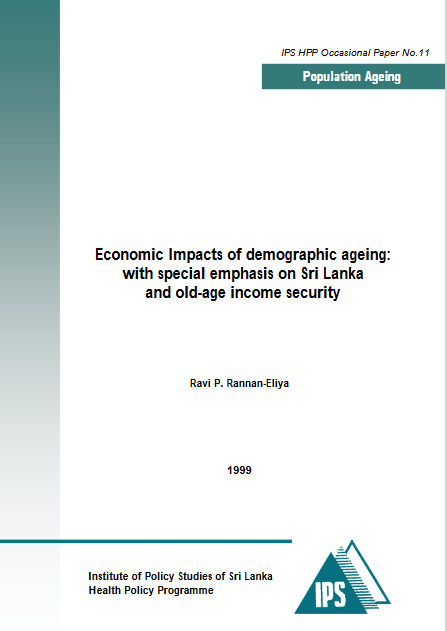 Ageing of the population is one of the few certainties about Sri Lanka’s long-term future. Although ageing does not operate in isolation from other social and economic forces, it is one of the few aspects of the future where it is possible to make meaningful and reasonably accurate projections well into the next century. At the same time, these other forces are likely to be of greater relevance to policy, but they cannot by their very nature be projected into the long-term future with any accuracy.

While ageing and demographic trends are not likely to be the most important trends shaping future outcomes, they are the most predictable, and an ageing perspective based on demographic forecasts can provide policy makers with valuable insights on future challenges and potential policy options. In Sri Lanka’s case, the expected rate of population ageing will be unusually rapid in comparison with other countries both in the region, as well as the historical experience of the advanced economies of Europe and North America. In comparison with the European countries where this took 50 to 150 years, the percentage of people aged 65 years and over will double from 7% to 14% in Sri Lanka in les than 20 years. Similarly, the median age of the population will increase rapidly from 25 currently to reach 50 in less than sixty years, or less than one life span.

The ability to take a longer-term perspective with the demographic future does not mean that policy action can be postponed. Sri Lanka has a short window of opportunity during the next two decades in which steps can be taken to modify existing policies, and develop new policy frameworks to cope with and mitigate the potentially negative impacts of population ageing on the country’s economy and society. Measures can be taken which address both short- and long- term policy goals in ways that are mutually reinforcing. Separately, each of these measures are unlikely to have much impact, but combined they will be much effective. If those steps are not taken, and policy adjustments are not made, it will be immeasurably more difficult for the country to adjust or recover lost opportunities when the problems are no longer undeniable and upon the country.

Much of the current discussion of the implications of population ageing by senior Sri Lankan policy makers and by the international financial institutions focuses on reform of the existing pension system only. However, population ageing will have impacts in all areas of the economy and society. The changes in each sector will in turn have implications for other sectors, and unless the problem is tackled in a comprehensive manner, no single set of measures focused only on one set of issues will succeed. The current narrow focus is unlikely to lead to sustained or effective reforms unless a broader perspective is taken, which understands the interrelationships between each sector, and which comprehends that the element of current pensions expenditures may only be the smaller part of the potential increase in fiscal pressures facing the government as a consequence of population ageing, and which takes into account the political and social feasibility of any reform options. For example, pensions reform and the establishment of a comprehensive pension system will not be possible for the whole population without commensurate changes in labour market policy, education and training strategies, and a sustained improvement in the underlying rate of economic growth and job creation. Similarly, if the experience of other democracies is relevant, a pension system based on individual savings accounts with no safety net or redistributive element is unlikely to be socially or electorally acceptable.

This report attempts to identify the key issues in each of the major sectors that are raised by population ageing in developing countries and Sri Lanka, review the literature, and to explore potential policy responses. It is not meant to be comprehensive or final in its conclusions. Given the importance of pensions policy in current discussions in Sri Lanka, this area is also covered in greater detail.