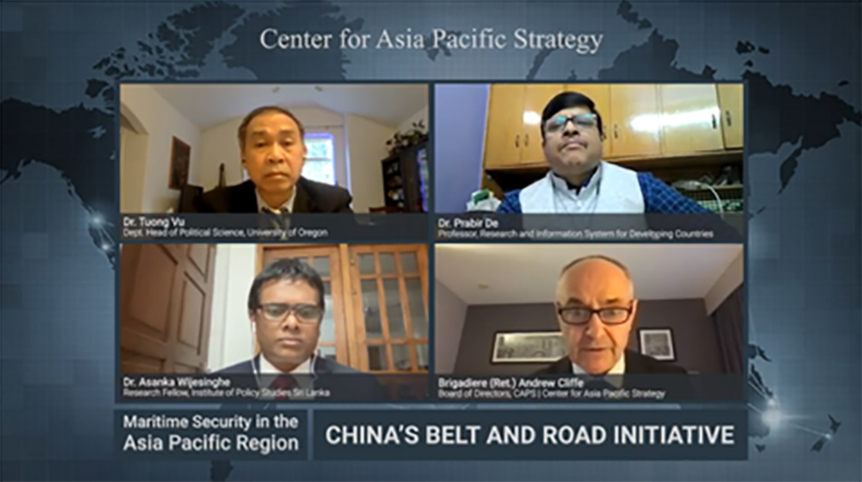 IPS Research Fellow Dr Asanka Wijesinghe attended the third roundtable discussion on ‘Asia Pacific Maritime Security: China’s Belt and Road Initiative (BRI)’ organised by the Center for Asia Pacific Strategy based in Washington-DC. The forum was part of a four-part series of a roundtable discussion hosted by the Center for Asia Pacific Strategy on current and future approaches to maritime security in the Asia-Pacific region. The third-panel debate was recorded on 14 February 2022.

Dr Wijesinghe shared Sri Lanka’s experience of the BRI with the panellists, focusing on the economic benefits and costs of the projects. He noted that the projects funded by China in Sri Lanka had improved internal connectivity in Sri Lanka, enhanced the country’s economic capacity and removed the infrastructure bottlenecks to a certain extent. In addition, deep seawater port and terminal had improved Sri Lanka’s handling of large vessels and contributed to environmentally friendly innovations, especially in using electric-powered cranes. However, the aggregate economic return and productivity gains from these projects and benefits for the local community had not achieved the desired levels.

He further remarked that the Sri Lankan government is keen to signal that China-funded projects are open for multilateral investments and will be not used for military purposes. There is no exclusivity for one country. Though BRI projects might have dual purposes – economic and geopolitical – due to geopolitical concerns, rival countries of China see these as projects with geopolitical interests. He emphasised that such perceptions may reduce the economic benefits of these projects. He suggested that extreme win-win cooperation will alleviate security concerns and maximise the economic benefits of the BRI projects.