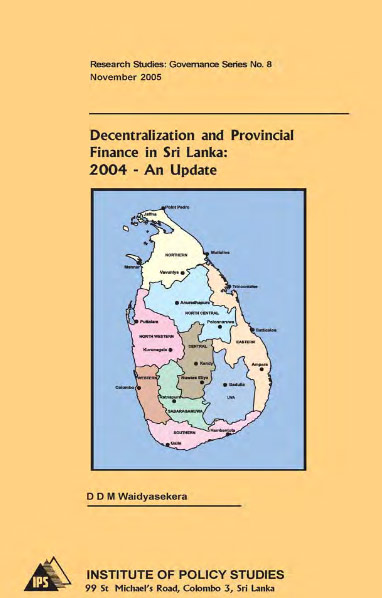 Decentralization and Provincial Finance in Sri Lanka: 2004 – An Update

Decentralization and fiscal devolution have assumed importance in Sri Lanka particularly in the context of the ongoing ethnic crisis, but the Provincial Council system which arose from the Thirteenth Amendment to the Constitution has several inherent weaknesses and deficiencies.

It also includes a list of the financial powers and functions devolved to the provinces, those in the list reserved to the centre and the functions relating to planning in the concurrent list as provided in the Thirteenth Amendment. The paper also includes a summary of the recommendations made to enhance the revenue performance of provincial administrations so as to reduce the vertical and horizontal imbalances presently prevalent.

This paper attempts to deal with some of the main issues pertaining to fiscal decentralization and provincial revenue in Sri Lanka in the context of the Thirteenth Amendment to the Constitution. Its objective is limited firstly, to fiscal and revenue issues and not to political, economic or social issues pertaining to decentralization or devolution. Second, its focus is on fiscal decentralization and not on devolution proper. Decentralization is essentially a means of implementing functions assigned at the discretion of the Centre and not embedded in the Constitution. Devolution is a broader concept and involves sharing, not mere control of functions or of finance. The issues discussed in this paper are therefore within these parameters and within the framework of the above limitations.

While a system of decentralized units in the form of Village Councils or “Gam Sabhas” existed in Sri Lanka from ancient times, prior to Independence the system of local government was essentially dependent on the central government and even after Independence what continued to prevail was administrative decentralization with the main authority being the central government and taxes being implemented by its departments and agencies with local bodies only enjoying limited revenue powers.

In 1973 and 1980 some attempts at decentralization were made but they were not major departures from the prevailing system. The Thirteenth Amendment to the Constitution certified on 14th November 1987, paved the way for the creation of Provincial Councils under Section 154A of the Constitution and enacted under the Provincial Councils Act No. 42 of 1987. This was an attempt made for the first time for the effective decentralization of administration by a process of devolution giving powers to the Provincial Councils to plan, execute and manage the totality of selected functions. However, the case of Sri Lanka as compared to other countries where multi-level systems of government prevail appears to be unique in that the sub-national units of government were introduced into a state explicitly unitary in character. Under Section 154 B(2) of the Thirteenth Amendment, Governors for the respective Provinces are appointed by the President and hold office during the pleasure of the President. Nevertheless, recent decisions by the Supreme Court have established that the Governors cannot act as mere agents of the President but must consult with the Chief Minister.

Under the Eighth Schedule of the Thirteenth Amendment the country was divided into nine provinces and under the Ninth Schedule the allocation of functions was categorized into three Lists — List I the Provincial Council List, List II the Reserved List and List III the Concurrent List. This followed the general trend of allocating matters of national importance to the Central Government and those of regional or local interest to regional or local governments. However, for the purpose of the Cenral Government having a strong influence on regional responsibility, the Concurrent List included certain subjects assigned to the periphery to be also of interest to the Centre. This interest is so even in federal states like Australia, the best example however being India where in its Seventh Schedule to the Constitution, there is a Concurrent List with overriding powers and also a proviso that the residual powers belong to the Centre. Table 1.1 provides the basic economic data of the provinces established.

Figure 1.1 illustrates in topographical form the demarcation of the provinces including the districts within each Province.

The rest of the paper is divided as follows: Section 2 deals with the revenue sources, volume and performance of the decentralized provincial units. Section 3 examines the revenue capacity and fiscal potential of the decentralized provinces. Section 4 describes the nature and extent of provincial expenditure. Section 5 analyses the prevalent system of fiscal transfers to the sub-national units and measures to bridge the inherent deficits of Provincial Councils. Section 6 summarises the weaknesses of the Provincial Council System and Section 7 concludes. The Appendix provides relevant annexures.