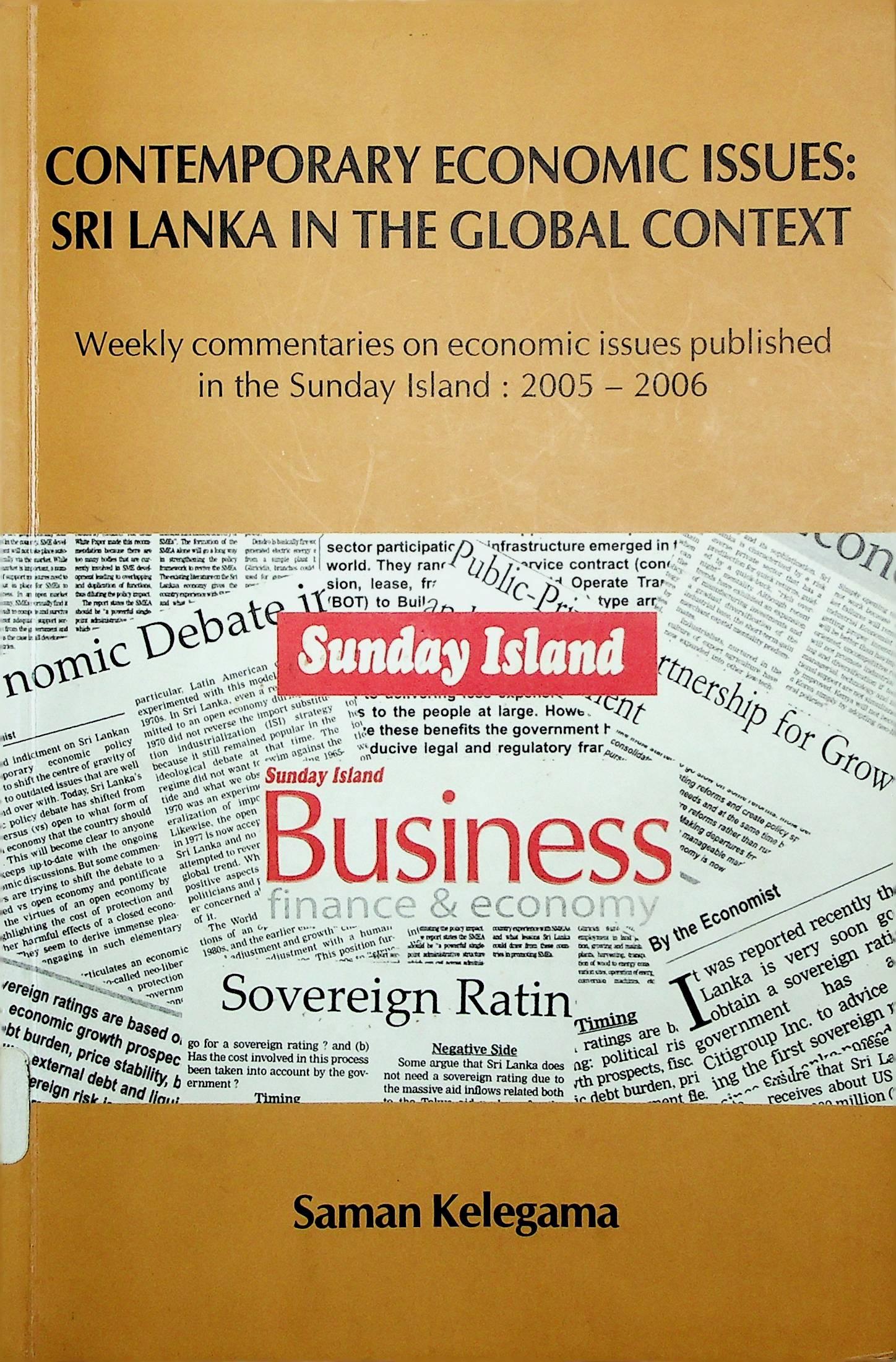 This book is based on weekly commentaries on economic issues published in the Sunday Island. The book covers an important period where a number of domestic and global events influenced the economy of Sri Lanka at regular intervals – a crisis in the electric power sector, the international oil price hike, GSP-Plus scheme coming into operation, operationalization of the Pakistan-Sri Lanka Bilateral Free Trade Agreement, steps to operationalize SAFTA, WTO debates before the Hong Kong Summit and the aftermath, growth of the Business Process Outsourcing industry, etc. The period under consideration also saw increasing inflow of aid, economic policy discussions and debates before the Presidential Election.

Mahathir’s Malaysia : Lessons for Sri Lanka
Economic Debate in the Comfort Zone
Unfashionable Economics and the Road Ahead
Regaining Food Security in Agriculture Development
Limitations of the Neo-Liberal Economic Model
A Mandate for a Mixed Economy
Unfashionable Economic Growth: Making Sense of the Picture
Connecting Economic Growth to Political Defeat: The Legacy of Grand Reforms
In Search of Economic Middle Ground

Why is the Rupee Sliding against the Dollar?
Sovereign Rating for Sri Lanka?
Problems of Financial Resource Allocation to the Regions
Unemployment: Why are Jobs Created in the Public Sector?
Regaining Rural Economic Prosperity
New Dimensions in Macroeconomic Management
Demographic Transition: Missing the Dividend and Facing the Burden

A New Agenda for the Industrial Association of Sri Lanka
GSP-Plus Scheme: Will it Support Ready-Made Garment Exports to EU?
Industrial Closure: New Developments in the Horizon
Industrialization Debate and the Way Forward
Developing the Mining and Mineral Sector

“Where managing change is crucial”

The Island, 15 November, 2006 – This book is based on weekly commentaries on economic issues published in the Sunday Island for about 10 months from the last week May 200t to March 2006….

Sunday Island, 17 December, 2006 – The book is a collection of articles written by the author during 2005-2006. The author had been contributing to the Sunday Island to continue the newspaper’s decade long “Kanes” column under the pen name “the Economist.”

Daily News, 27 May, 2006 – Dr. Saman Kelegama presented the first copy of the book “Contemporary Economic Issues in Sri Lanka in the Global Context” compiled from weekly commentaries on economic issues published in the Sunday Island in 2005 and 2006, to President His Excellency Mahinda Rajapaksa at Temple Trees.
“Books of literary and economic value launched”

Daily Mirror, 27 May, 2006 – Two books being compilations of work carried out and writings titled, Public- Private Sector Partnership in Economic Development: A Case for Sri Lanka and Contemporary Economic Issues: Sri Lanka in the Global Context was launched recently by the Sri Lanka Economic Association.

Sunday Island , 21 May, 2006 – Sri Lanka Economic Association will release the book: Contemporary Economic Issues: Sri Lanka in the global Context. The book is based on a collection of 40 essays that appeared in the “ Sunday Island ” during May 2005- March 2006.