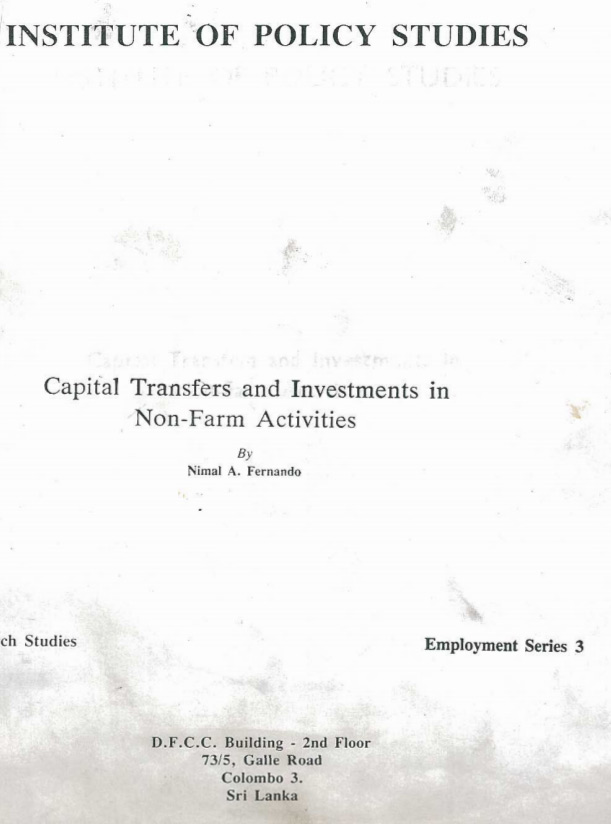 A number of researchers have recently pointed out that the current trend towards low labour absorption in agriculture in the countries falling into the category of “late comers” is likely to be strengthened by the labour-saving agricultural innovations likely to come into the market on a growing scale and at a lower unit cost (Jayasuriya and Shand, 1986). It is increasingly realised, by both researchers and policy-makers, that employment opportunities will have to be found on a greater scale outside the agricultural sector to reduce unemployment and poverty and improve the distribution of income, which is one of the key development objectives in many developing countries today (Anderson and Leiserson, 1980: Meyer, 1983; Ho, 1986).

Despite the important role that non-farm activities can play in development, very few studies have been undertaken on these activities in Sri Lanka. Furthermore, the available literature has failed to deal with an important aspect of their development, namely, capital transfers for, and investment in, such activities. In this paper an attempt is made to discuss the issues relating to this so far neglected area.

This paper consists of seven sections. Section 2 provides definitions of the key terms used in the paper. Section 3 discusses the methods and mechanics of capital transfers and the determinants of capital surpluses in general. In Section 4, this general discussion is applied to the specific case of Sri Lanka. Section 5 is devoted to a general discussion of several aspects relating to investments in non-farm activities while Section 6 examines non-farm investments in Sri Lanka together with factors affecting such investments. The concluding section presents a brief outline of a possible strategy for promoting non-farm investment in Sri Lanka.