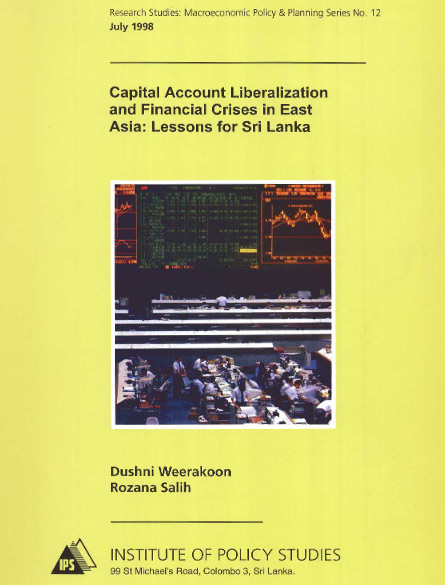 Alongside trade and payments liberalization, the rapid integration of financial markets in the 1990s has hastened the process of globalization in international trade and finance. Total capital flows to the developing world soared to US$ 303 billion in 1996 from US$ 237 billion in the previous year, thanks to a sharp rise in private flows to a record US$ 234 billion (up from US$ 160 billion in 1995). And nowhere has this phenomenon of increased access to international capital markets been more notable than in the rapidly growing economies of East Asia.

Under perfect market conditions, it is contended that the potential benefits of free capital movements (facilitating an efficient global allocation of resources and channelling them into the most productive uses) outweigh the costs (increased vulnerability of an economy to swings in investor confidence). The magnitude and composition of inflows and their productive deployment in the economy may be beyond the control of national governments, in economies where the private sector has become dominant. The latter is typically allowed unrestricted access to external finance in the belief that it has the capacity to assess carefully the costs and benefits on which borrowing and investment decisions are made. However, when the market’s judgement is impaired by the existence of market failures (the existence of asymmetric information, incompleteness of contingent markets), it can lead to excessive borrowing from abroad, or excessive lending by international financial markets which may eventually undermine macroeconomic stability.

If the first best option of removing market imperfections is not feasible, then the desirability or otherwise of opening the capital account rests on the perceived ability of governments to deal with capital flows. An increased inflow of capital confronts governments with its own set of problems, including whether to accept or resist such capital inflow, or how much to accept and how much to resist. The impressive growth performances of the East Asian economies, driven by a surge in foreign capital inflows in the 1990s, were regarded as successful examples of macroeconomic management. In the aftermath of the financial crises of 1996/97, the policy-mix adopted by most East Asian economies has come under criticism – particularly the adoption of a virtually fixed rate of exchange. Together with weak financial sectors, they can be identified as the main reasons for the crisis that engulfed the region.

In Sri Lanka, foreign capital inflows to bolster investment and hence the rate of growth is regarded as an even greater necessity in the context of a low rate of savings in the country. Is a free and open capital account, however desirable in the light of the East Asian experience? Do policymakers have the necessary manoeuvrability and the flexibility to fine-tune economic policy to deal with the macroeconomic consequences of large and sustained capital inflows? And even if Sri Lanka were to adopt an open capital account regime, would it necessarily lead to an increase in foreign capital inflows and if so, what type of inflows are likely to occur or is an outflow of capital more likely?

This paper examines the underlying causal factors that combined to produce the East Asian financial crisis and attempts to draw useful lessons for Sri Lanka as it endeavours to emulate their development experience. Section 2 discusses the changing trends in foreign capital flows in the 1990s that underlay the emergence of instability in capital movements across borders and the means open to governments to deal with a surge in foreign capital flows. Section 3 discusses the financial crisis in East Asia with particular attention to the role of the financial sector; Section 4 examines Sri Lanka’s past experience in dealing with a surge in capital inflows and the lessons to be learnt from the East Asian experience; and Section 5 summarizes with the concluding remarks.