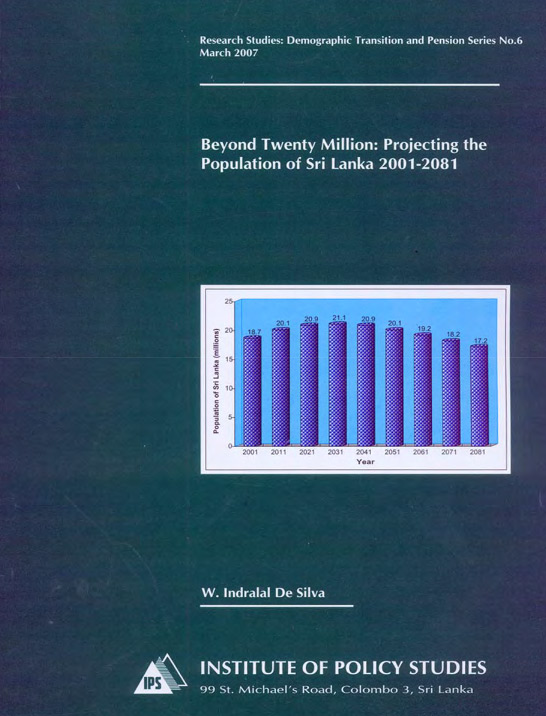 Beyond Twenty Million: Projecting the Population of Sri Lanka 2001-2081

There has been some concern about the consequences of human population growth for the environment and for social and economic development. Thus, population projections are of crucial importance in socio-economic planning and are an important element in the planning process. Integrating population projections and data into the planning of development activity will contribute to the success of development efforts. In this light it is important that due attention is paid to the numerous demographic factors, such as future change in size, composition and distribution of the population.

Population projections are essentially concerned with future growth, and are utilized to assess the plausible demographic situations of a country through an understanding of the processes that may lead to a particular scenario at a future date, as well as to highlight what implications could be expected in the future as a result. It is also useful for users of such projections to discuss the extent of departures from the actual turn-out, as well as to indicate the record of accuracy in previous projections made for Sri Lanka.
•    Table of Contents
•    Reviews and Highlights in the media
•    Order publication: Contact Publications Unit to clarify delivery charges to order this Publication
Table of Contents
•    List of Tables
•    List of Figures
•    Abstract
o    Methodology
•    Data, Time Horizon and Assumptions
o    Data.
o    Time Horizon
o    Assumptions
o    Fertility Change and Assumptions for the Future
o    Mortality Change and Assumptions for the Future
o    Migration Change and Assumptions for the Future
•    Size and Growth of the Future Population
•    Components of Population Growth
•    Characteristics of Future Population
o    Median Age
o    Population by Broad Age Groups
o    Dependency Ratio
•    Appendix A
•    Appendix B
•    Glossary
•    Reference
Reviews and Highlights in the media
“Population will decline after 2040”
The Sunday Times, 17 June, 2007 – Sri Lanka’s population will decline after 2040, primarily due to a significantly low level of fertility, a think-tank has warned. Research by the Institute of Policy Studies has revealed that Sri Lanka’s population which is around 20 million now will reach 20.1 million by 2011 and could attain its peak of 21.1 million in 2031.
Download the article