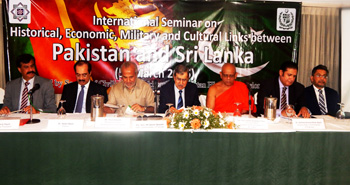 The High Commission of Pakistan, in collaboration with the Society of Civilizations Pakistan (SOC), organised an international seminar on Pakistan and Sri Lanka’s historical, economic, military and cultural links in Colombo.

IPS Executive Director, Dr. Saman Kelegama, speaking at the event, pointed out the importance of Sri Lanka to further diversifying its exports to Pakistan in order to gain maximum benefit from the Free Trade Agreement (FTA) between the two countries. Dr. Kelegama noted that even though Pakistan had allowed Sri Lanka to export 156 goods without any tariff, Sri Lanka exports only 35 goods out of tariff free goods. However, he noted that the bilateral trade between the two countries had expanded over the last decade.

Minister for Urban Development, Water Supply and Drainage, Hon. Rauff Hakeem was the Chief Guest at the event. Several Prominent scholars from the two countries participated in the seminar and shared their in-depth analysis on the subject.

While recognizing the significance of political and military relations, all scholars highlighted the need to further enhance cooperation between the two countries in the spheres of economy, culture, education, tourism, public diplomacy and disaster management.