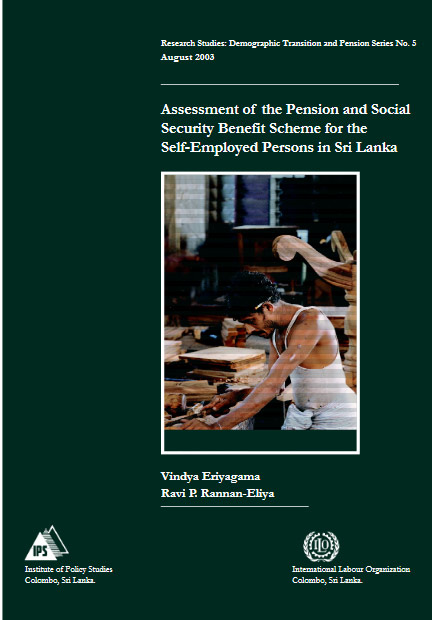 A substantial proportion of the Sri Lankan labour force is made up of self-employed persons and workers engaged in the informal sector. According to the Labour Force Survey data, 27 per cent of the labour force in Sri Lanka comprise own account workers (Central Bank Annual Report, 2001), which is the next largest segment of workers in the country, after the private sector employees who account for the largest occupational category (48 per cent). The contribution the self-employed persons and the informal sector employees make towards the economy of the country and to the community at large is extensive and significant. Yet, it is doubtful if they are sufficiently rewarded or compensated in terms of economic and social benefits that the other occupational categories enjoy for the services they provide, particularly those employed in the formal sector. Of all the benefits that the formal sector employees receive, the provision of a retirement income security to lean on in their old age could be cited as the most important reward granted to them by way of pension and social security systems already in existence.
Unfortunately, this is not so in the case of the majority of the informal sector workers and the self-employed persons. For the most part, they are left to fend for themselves even when incapacitated by age and by life contingencies of disability. Many of them are left without any source of income of their own to fall back on and are forced to rely on the quantum of the family support. As such, many of them are faced with a bleak future in the twilight years of their lives. It is evident that very little thought has been given in this regard. It is also obvious that all of those retirement provision systems that are already in operation have so far failed to incorporate this category.
The recognition of the importance of this much-neglected issue of social security provision for the employees in the informal sector was first given force with the initiation of the Farmers’ Pension and Social Security Benefit Scheme in 1987. Since then, the Government of Sri Lanka has taken steps to further expand this facility to other informal sector workers by introducing other similar schemes. As a result, the Fishermen’s Pension and Social Security Benefit Scheme was introduced few years later in 1990. Third, in furtherance to this attempt, the Pension and Social Security Benefit Scheme for Self-Employed Persons was set up in 1996.
Table of Contents:
• Executive Summary
• Introduction
• Establishment and Organization of Pension and Social Security Benefit Scheme for
Self-Employed in Sri Lanka
• Assessment of ability of Social Security Scheme to provide social security to its target
population
• Policy Options and Implications
• Bibliography