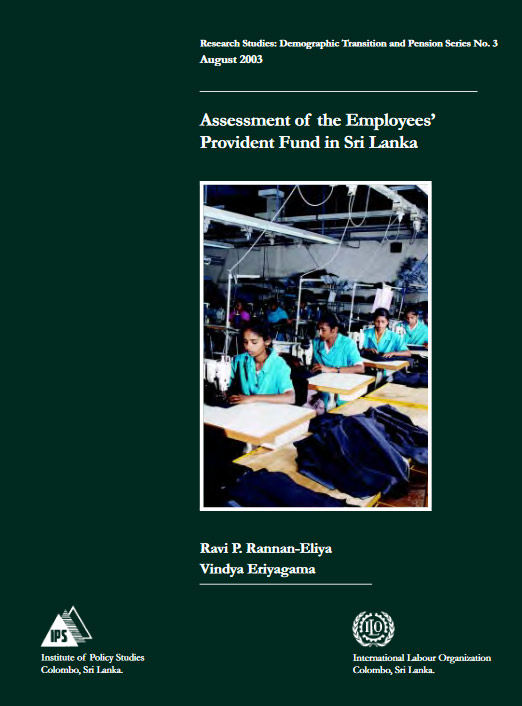 Assessment of the Employees’ Provident Fund in Sri Lanka

The Employees’ Provident Fund (EPF) is by far the largest such fund in Sri Lanka. It was established in1958, around the same time that similar provident funds were established in Singapore and Malaysia, then still under British colonial rule. In retrospect, given the relatively advanced state of welfare policy in Sri Lanka at that time, the motivations and rationale for establishing the EPF in Sri Lanka were quite similar to those in the more urbanized and economically developed Singapore and Malaysia. Policy makers in all three countries wished under ideal circumstances to adopt the state pension system as existing in what was then the British model, but practical and economic realities prevented such a system being realized. In Singapore and Malaysia, the Central Provident Funds (their equivalent of the EPF) were designed by British civil servants sent from London as second-best options to substitute for the perceived unfeasible UK pension model. In the case of Sri Lanka, the EPF was largely chosen and adopted as a model by Sri Lankan civil servants and political leaders, albeit at a time when they were perhaps more closely integrated than now to policy debates in the English-speaking world. The major difficulties preventing the adoption of a universal pension system at that time would have included the large proportion of the work-force who were in subsistence agriculture and non-formal employment, and the large proportion of the population who were not of adult age or participating in the work-force. In addition, the practical and technical difficulties of designing and managing a national pension system, given the then existing capabilities of the Sri Lankan state would have influenced policy makers, in addition to the relatively low rates of economic growth that Sri Lankan policy-makers had experienced since the global recession of the early 1930s induced by US trade isolationism.

Since 1958, the EPF has operated relatively smoothly under Central Bank supervision. It now controls the largest stock of savings in the country, and plays a major role in public policy, not only as a potential source of retirement income for its beneficiaries, but also as the major financier of the government structural fiscal deficit.

In recent years, both the actual and perceived shortcomings of the EPF system have attracted much debate. However, many of the most frequently alleged shortcomings and deficiencies are misplaced, and some of the most substantial deficiencies have been overlooked. Nevertheless, the relative success of the EPF can and should be built on to further improve its benefits for its current beneficiaries and to extend those to a larger cross-section of the workforce.