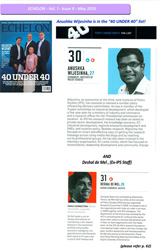 Anushka Wijesinha, Research Economist, IPS, Highlighted in ’40 Under 40’, in the Echelon Magazine

Echelon – A monthly magazine which covers in depth, Sri Lanka’s most successful businesses examines their winning strategies and profiles their leaders in immersive stories. In its ‘40 UNDER 40’ Feature, Echelon highlights young innovators, disruptors, thought leaders and builders of businesses who touched the lives of people all over the world by creating jobs, influencing actions and developing new ways of doing things. IPS staff member, Research Economist, Anushka Wijesinha has been selected as one among the forty.

Anushka Wijesinha is currently a Research Economist at the IPS, in the Industry, Public Enterprise Reform and Regulatory Policy Research Unit. His key areas of research include industrial development strategy, SME policy, economic governance, and public-private partnerships. He was previously seconded as the Research Officer to the Presidential Commission on Taxation. He earlier worked as the Assistant Director, Economic Affairs, at the Government Peace Secretariat, where he was involved in identifying key opportunities and constraints in the conflict-affected economies of the North and East, and promoting private sector enterprise. He has also worked as a short term consultant at the World Bank, Sri Lanka, in the South Asia Finance and Private Sector Development section.