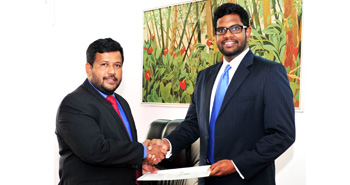 Anushka Wijesinha, Research Economist, IPS — appointed as a Special Advisor to the Ministry of Industry and Commerce

Anushka Wijesinha, Research Economist and Acting Head of Industry, Competitiveness and Regulatory Policy Unit of IPS, was recently appointed as the Special Advisor on Industrial Development and Youth Entrepreneurship to the Ministry of Industry and Commerce.

Congratulating on the appointment, Minister of Industry and Commerce, Hon. Rishad Bathiudeen, stated that “industrial development is a vital aspect of fulfilling our hub ambitions as per the vision of His Excellency the President, Mahinda Rajapaksa. As we diversify our exports towards non-traditional products, our industries become even more crucial and we have so much to do.”

Prior to the appointment, Anushka also assisted the Ministry by acting as the Lead Author of new industrial development framework and Five-Year Action Plan (2011-2015) with the seven-member committee of experts. He is also involved in the Small and Medium Enterprises (SME) policy development efforts as well.