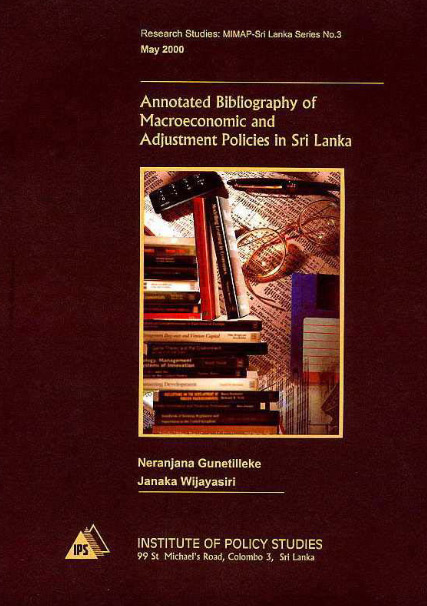 Annotated Bibliography of Macroeconomic and Adjustment Policies in Sri Lanka

Macro economic policy reform in Sri Lanka has been the subject of extensive study by local as well as international researchers. This annotated bibliography focuses on consolidating literature relating to the post 1977 period. The greatest concentration of macro policy literature is on the ‘First Phase’ of reform (1977-89). The post 1989 period which has come to be termed the ‘Second Phase’ has a certain amount of literature, though not quite comparable to the literature of the period before. The period after 1994 is scarcely documented. In an attempt to overcome the paucity of literature in the post 1994 period, selected World Bank gray reports relevant to the period have been included in this bibliography.

Primary documents such as the annual Public Investment Programme published by the Government of Sri Lanka, though a vital source of information, have not been included in the bibliography.

This bibliography has been presented in two parts to overcome a practical difficulty faced in its compilation. It had not been possible to locate certain references in order to provide a full annotated bibliography. However, being reluctant to present no record of this literature, the incomplete references have been presented in Part Two of the document. It is hoped that this section could be updated with the assistance of users of the bibliography.

As the Institute of Policy Studies is in the process of developing a repository of policy and poverty related literature, an attempt has been made by the Institute’s library to obtain copies of most literature listed in this bibliography. Further, a computerized data base which includes additional bibliographic information such as class numbers, keywords, accession numbers, and availability, has been compiled by the IPS library and is expected to be updated continuously.