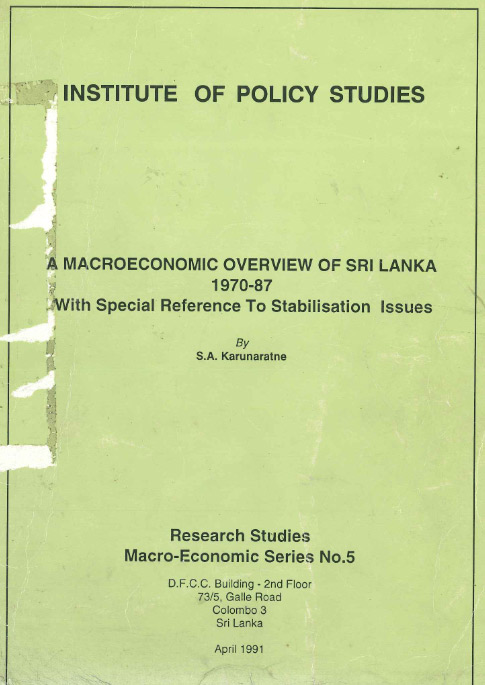 For purposes of understanding the evolution of the macroeconomy of Sri Lanka in the period since 1970, it is useful to divide the 18-year period 1970-1987 into two sub-periods, the dividing line being drawn at 1977. At this point, a number of far-reaching economic policy reforms were introduced. A definite acceleration of economic growth and a general improvement in economic activity followed these economic policy reforms. For most macroeconomic variables 1977-1978 appears to be a point of departure from the old trend. See for example Charts 1 and 2.

However, together with these changes and also as a consequence of other elements in this reform package, the overall balance between supply and demand for resources became suddenly disturbed; so much so that, in the period since 1981, the restoration of economic stability became a major policy objective. A question that naturally arises concerns the trade-off between growth and economic stability. A closer analysis of the movements of the various macroeconomic variables may provide useful insights into the nature of this trade-off in the case of Sri Lanka and, consequently, may help to draw some lessons for the future.

The approach in the present paper will be basically one of examining the movements of the major macroeconomic variables in the two periods. The emphasis will be on the identification of similarities and differences between the two sub-periods and on the nature of common or invariant factors.