The Summit was organized by the Research and Information Systems for Developing Countries (RIS), India. IPS organized the 6th SAES in Colombo last year and was a co-organizer of the 7th South Asia Economic Summit along with CPD (Bangladesh), SAWTEE (Nepal), SPDI (Pakistan), and SACEPS (Nepal). The broad objective of the Summit was to facilitate a dialogue between relevant stakeholders to identify key trade and socio-economic issues for regional cooperation in South Asia.  The deliberations at the Summit would be used to frame recommendations for the upcoming 18th Summit of South Asian Association for Regional Cooperation (SAARC), to be held in Nepal and graced by the heads of state of SAARC governments.

At the summit, the book titled ‘Towards a Stronger, Dynamic and Inclusive South Asia’ jointly edited by Dr. Saman Kelegama and Anushka Wijesinha was launched. The book contains the revised background papers of the four plenary sessions at the 6th SAES held in Colombo 2013. 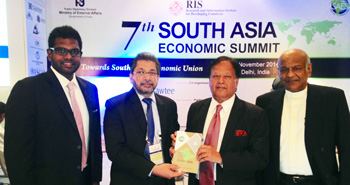