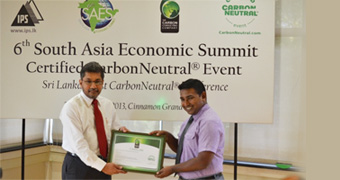 IPS obtained global CarbonNeutral® certification for the 6th South Asia Economic Summit that it is hosting in September this year. The press briefing in this regard took place on 30th April 2013, at the IPS Executive Lounge.

The IPS worked in partnership with the Carbon Consulting Company (CCC) to obtain the ‘CarbonNeutral®event’ certification from The CarbonNeutral Company, UK.

Speaking at the press conference, Chief Operating Officer of Carbon Consulting, Sanith de S. Wijeyeratne, said “When IPS approached us on this unique initiative, we immediately lent our support. This will be Sri Lanka’s first CarbonNeutral®Conference and demonstrates a real commitment to the climate change agenda”.

Executive Director of the IPS, Dr. Saman Kelegama, noted “after we launched the first one in 2008, the South Asia Economic Summit is now back in Sri Lanka in its 6th year. It has become the premier regional platform that debates socio-economic issues facing South Asia. Climate change is a critical issue for all countries in this region. We are happy that the CCC is partnering with us to bring in a sustainability focus to this important event and certify it as CarbonNeutral®”.

Chief Coordinator of the Summit, IPS Research Economist, Anushka Wijesinha said, “At each Summit there is a focus on environmental challenges and climate change facing South Asia during the technical sessions. But we wanted to walk the talk and truly embody the sustainability spirit in this year’s Summit and wanted to go for this carbon neutral effort”. He added that, “Hundreds of conferences and seminars with foreign participants are being organized each year in Sri Lanka and MICE tourism is growing. But we often forget the immense impact on the environment these events have – the hotels, the air travel, the domestic transport, conference materials, etc. Organizers need to think harder about how to mitigate the significant carbon footprint these events have”.

The Summit will be held at the Cinnamon Grand Hotel from 2nd – 4th September 2013. 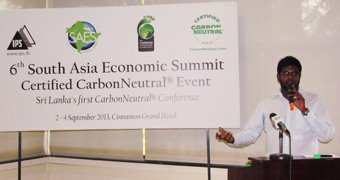