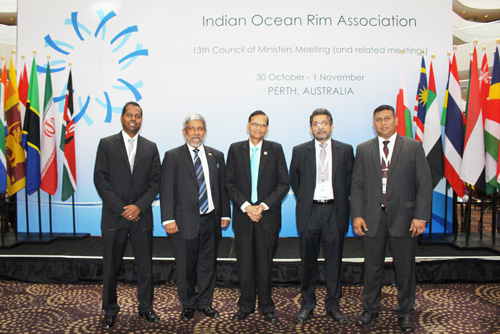 Dr. Saman Kelegama, Executive Director of the IPS represented Sri Lanka as the spokesman for the Indian Ocean Region Academic Group (IORAG), at the 13th Council of Ministers Meeting held in Perth, Australia during 29th October to 1st November 2013. IPS is the focal point of the IORAG in Sri Lanka. A submission from Sri Lanka in 2010 on the “Centre for Excellence on Ocean Sciences and Environment for Indian Ocean Rim Countries” was approved by the Council of Ministers at the Meeting. The Concept Paper for the above submission was prepared by the IPS.

The Centre for Excellence will be launched in May 2014 by the IPS and the Lakshman Kadirgamar Institute of International Relations and Strategic Studies with the representatives of IORAG from the Indian Ocean Rim Association.